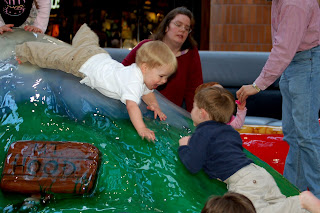 So, we like to visit the mall from time to time, although not so much to shop like most people do. Nope, we go for the free entertainment of the kids at the little play area. Here was our latest trip last week. The boys think it's pretty cool to slide down Mt. Hood. They get especially excited when they happen to run over each other, or even better, an innocent bystander in the process.
Posted by daveandbri at 8:36 PM No comments:

HAPPY BIRTHDAY to DALLAS and GRANDPA 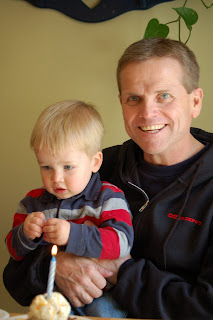 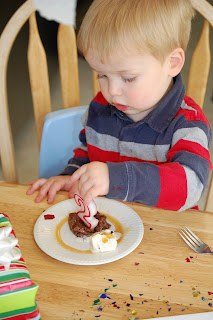 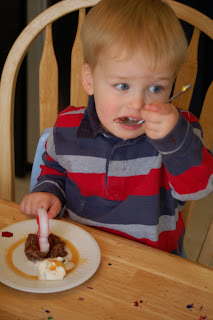 Together, Dallas celebrates his second birthday (April 12th) and Grandpa celebrates his 52nd (April 13th) on Saturday April 14th. The two share many things in common: short in stature but big in heart and head, fun loving and of course a love for all things sweet!
Posted by daveandbri at 3:20 PM 2 comments: 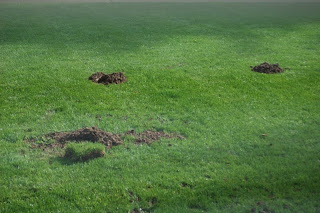 So there has been this stupid little mole that has been tearing our lawn apart and it's driving me crazy! Considering how small the actual tunnels are this thing can't be bigger than a hampster but it's amazing how quick this thing digs. This picture is only 3 of maybe 20 piles it's managed to create in less than a week. We've installed as non-humane of a trap we could find(note the flap of grass in the photo) and it builds a pile of dirt right next to it (note pile of dirt right next to said flap of grass). On occasion I have caught the little bugger pushing dirt up to the surface, but something tells me it is really good at feeling me coming because anytime I start to get close the dirt movement stops. Late one night after getting home from school I noticed a new pile of dirt (the upper left one in the picture for those keeping score) so as I am investigating why the crap the trap isn't working I notice this fresh pile moving. This was the closest I'd been to a moving pile of dirt before... "maybe I can finally kick this thing in the act". So, like a tiger about to pounce on it's prey, I set my pivot foot softly... dirt still moving... visualized the mole, with a look of confusion and horror on it's face, flying through the air... dirt still moving... and kicked with all my might as though it was a 56 yard field goal to win the Tostitos Fiesta Bowl, obliterated the dirt mound, and found that the only thing flying through the air was my dirt covered shoe; I hadn't tied them very tight that morning. Mole: 21(note next morning pile in the upper right), Me: 0
Posted by daveandbri at 4:47 PM No comments: 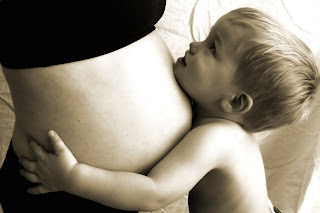 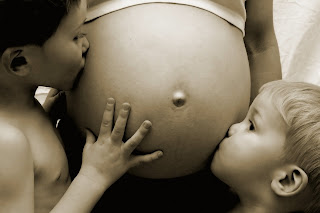 So I'm going to try and convince Bri to get into this blogging buisness since it seems like a good way of keeping people up to date on what we are up to, and seeing how I am at school from 6 am to 8 pm, I'm not sure how often I'll be able to keep it up (though I guess Bri being home with two crazy boys and soon to be brand new (calm?!? PLEEEEAAASE) baby girl, our blogs may be few and far between, but hey, let's give it a shot.
Posted by daveandbri at 8:47 PM 1 comment: