Perhaps my use of words isn't very appropriate, but when were my words ever that way? My mom's birthday was a couple of weeks ago and after talking to her a few times on the phone that day to wish her well, I got a late night phone call from her as she tells me, "My dad died." I obviously didn't hear her right so I responded, "Excuse me?" (Stupid me making her repeat the horrible news again.) Well I did hear her right and she and I, like everyone else were shocked. This man, although no spring chicken, was as young and spry as any grandpa around. He was less than two weeks away from his 77th birthday when he mysteriously died while scuba diving in Hawaii. What a way to go though right? I hope if I die semi-young, it is living life as he was.
We still don't know what happened, but the results of the autopsy are expected any day now.

His funeral was this past Friday, none other than Friday the 13th and his burial took place a day after his birthday on Monday November 16th. I was able to make it out to the funeral with Lexi while the rest of my family stayed behind. It was a long (as far as time traveling goes) and short(as far as time spent with family goes) trip. As much as all of the family would have liked to be reuniting under different circumstances, it was really good to see everyone and my mom kept saying how it felt like the holidays because of that.
Highlights from the trip:
I finally got to know my sister-in-law Aimee and little better and she stepped right into the role of Aunt being a huge help with Lexi all weekend.
I got to experience my first emergency landing on airplane as one of the passengers suffered from a stroke in the air on my way home.
I got to sing in front of several hundred people during the memorial service in a quartet that ended up with 5 people somehow (good thing I have such a nice raw voice-as in unrefined and untrained). My proud moment was simply that I was able to block the the loss of my grandpa from my mind long enough to sing at all. (Having all the grandchildren sing the closing song at the end was a bit of a different story . .it was more of a have all of the grandchildren stand up in front of everyone and cry . . . but I guess Grandpa would have appreciated that just as much as he was much better at crying than singing himself)
.
I'll save the rest of the mushy details for my personal journal and share some of the pictures from the weekend.
The survivors of M. Keith Hansen: his 5 sons, 1 daughter and mother. 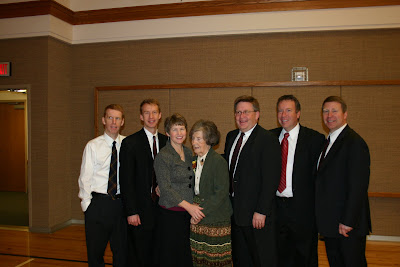 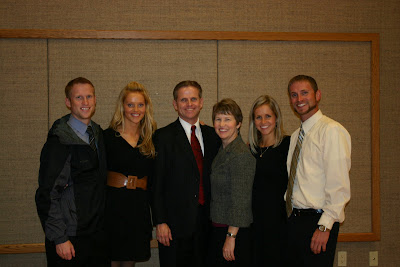 Why I miss Oregon: Hello beautiful and you can't even see Mt Hood because of the clouds-which leads me to my next point of why I don't miss Oregon: the incessant overcast and rainy days.
(I took this picture from the window of the guest bathroom at my parent's house.) 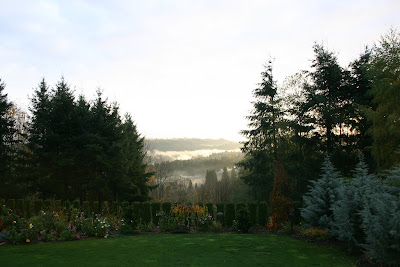 The evening get togethers where there are too many people in too small of space and yet we wouldn't want it any other way. 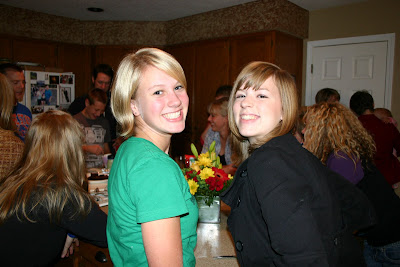 Lexi, Aimee and Kevin .. .look they're totally ready for a baby. 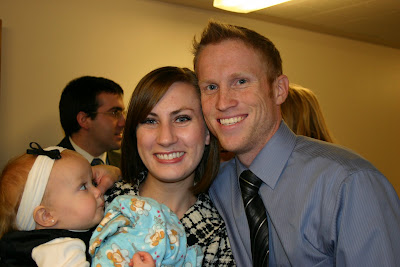 The baby. Champion traveler. So glad I didn't have to be all alone. 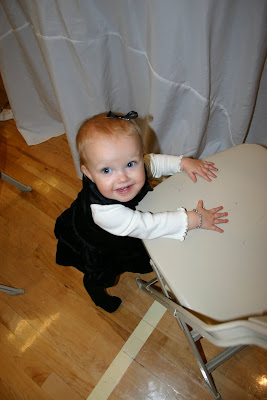 All Dressed and Sugared Up 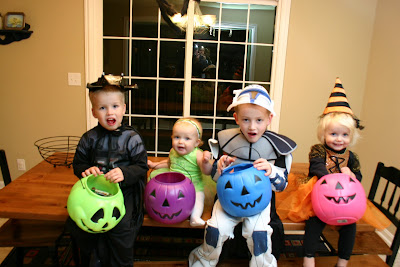 Featuring: Darth Vader, Tinkerbell Captain Rex Clone Trooper (or something like that) and our little Witch. Margaret and Nick bought the kids pumpkin pails and they were put to good use around the block on Halloween night. 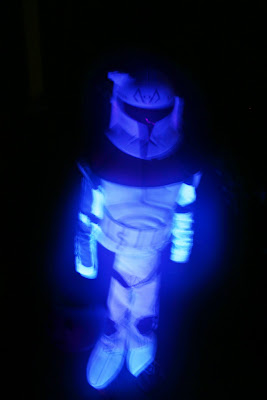 Trenton was just glowing that evening as he came back with all of his treats (and stood by our black light). 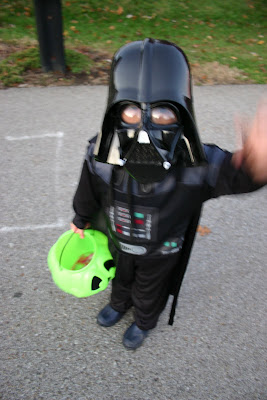 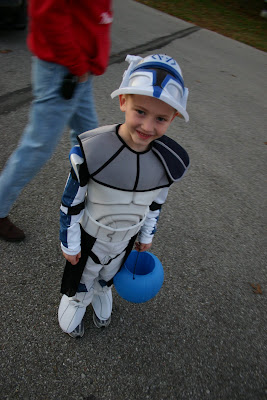 The mand behind the mask 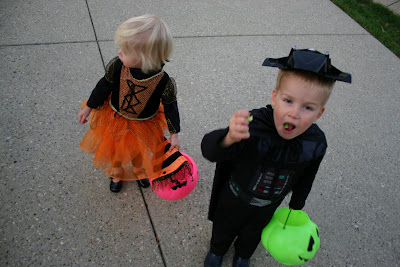 One treat collected, one treat consumed. Go Dallas.
We were a little late getting started as they begin trick or treating long before dark here (maybe because we're sort of out in the country and it really does get dark without any street lights??) Dave took the 3 kids who can walk on their own two feet around the block and I manned the fort with Tink handing out candy to little beggers. I love Halloween.