What do your kids do for "fun"?

I know everyone thinks that his or her own kids are perfect, but let's get real . . .that was a one time occurance on this earth so I want to know what makes your kids less than perfect. Most kids will do something really funny/annoying every now and then, but I want to know the things along these lines that your little ones do repeatedly. I am going to make my own list to contribute and then when I am old and missing the days when my kids were little and cute, I will look back at this list and hopefully not miss my kids being young quite as much (okay I'll probably still miss that stage, but maybe this list will make me laugh more in the future rather than yell, cry and roll my eyes like it does in the present.

*sleeps all day, awake all night

*always drops a load right after I've changed her diaper, or better yet, as I am chaning her diaper . .nothing like being shot from the behind (literally)

*projectile vomit anyone? again, right after she's just been dressed in a clean outfit

*empties any diaper wipes, kleenex boxes, toilet paper rolls that she can get her hands on in 5 seconds flat


*makeup here, there, everywhere . . .there are many days that I don't ever get around to dolling up so one would think that I wouldn't go through makeup very quickly. And, that would be the case if Brooklyn didn't have a knack for sneaking into the bathroom and applying mascara to her face, hair and the floor/ eating lipgloss/ dumping out foundation and powders, etc. etc.

*whiner- she will not stop whining until she gets what she wants . .which is fine unless we're in public and then it can be a little embarassing

*clogged toilets . . .could someone please explain to this kid for the umpteenth time that he doesn't need an entire roll of toilet paper to wipe his behind and actually have him still remember the next time he visits the john.

*Food, food, food. this list alone could be published as a novel, but his latest was getting into unopened boxes of jello not once but twice in the same day. The second time he was successful in dumping the entire thing out on the floor of his bedroom as he gleefully licked handfulls of cherry flavored powder. His hands washed up just fine, unfortunately knowing that the second the jello on the carpet got wet the red dye would kick in . .I decided to just vacuum it up instead. The downside. . there is still a nice large spot of pink tinted carpet in his room waiing like a timebomb for a run in with liquid. The upside-everytime I vacuum our house is now filled with the pleasant scent of cherry candy.

*spills-He is incapable of making it through a meal without spilling his drink. Okay, maybe he's done it a couple of times, but our solution for the remaining 99% of the time that he does spill is give him about an ounce at a time . .which means Dave and I spend our meals pouring beverages rather than eating.

*Backwards-Dallas puts on every article of clothing backwards about 90% of the time. . . .shirt, underwear, pants, shoes. Most days I don't care, but when I do want him to look somewhat presentable. . it means 5 extra minutes of prep time getting him redressed the right way.

*wet diapers-this kid will probably wear diapers at night until he's 20 . .hopefully at 20 he won't still take them off in the morning and just leave them on the floor for all to smell and on a really go0d day step on with a barefoot.

*Cologne-Dave keeps his cologne on a shelf in our bathrrom that the boys can access by standing on the toilet. For some reason, both boys think this is some type of hair styling product and are forever coming out with heads drenched in Calvin Kelin Euphoria. Are you beginning to smell our house yet . .. .dirty diapers, cherry jello and now cologne . . . .mmmmmmmmmmm.

*Bully-everyday when Trenton gets home from school there is an immediate mood shift in our house. The energy level goes up about 75% and the crying spells are much m0re frequent as he constantly pesters Brooklyn by taking her blanket, doll, chair or whatever object he knows she will cry for until she gets it back and bugging Dallas with the incessant hit, push, kick, tap, etc. Isn't the oldest child supposed to be helpful in tending to the younger ones? Maybe I would have had more luck had he not been a boy and been only 5 years old as the oldest child. Is it too late for a redo?

Okay I'm done . . .surely there is more, but that is enough for now. Did I mention that I love my kids? I do. Sure I find them and their reactions and tantrums rediculous at times, but who wouldn't? Kids were meant to make messes, push the limits and test the patience of those tending them . . .that is how both the children and parents learn and grow in this life.

So, back to my original question . .what do your kids do over and over for "fun"? Remind me that I'm not alone in this.
Posted by daveandbri at 11:02 AM 8 comments:

Lexi turned 11 days on Halloween and thanks to help from my mom and Dave not being stuck at school too late that night, we did still celebrate. My mom helped me take the kids to some daytime trick or treating at some little shops near our house and then Dave took them to 5 houses for real trick or treating in the dark that night.

Here is our lame attempt at a costume for the baby: a cute little witches hat inherited from my aunt. She did what babies do best . ..slept all day and not too much that night. 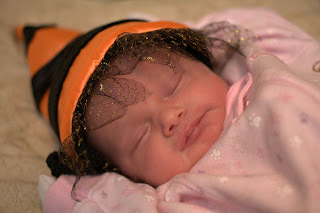 Brooklyn stole the hearts (and candy) of many as she walked the streets in Multnomah Village as the cutest little cheerleader ever. Notice she had to bring her purse along to collect the goods. 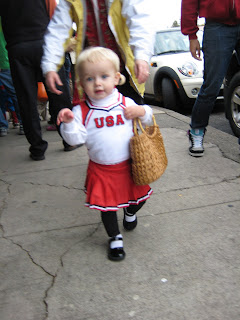 Dallas donned Trenton's old costume: an ugly purple dragon that reminds me way too much of Barney. He loved it all the same (really anything was a step up from wearing Trenton's dirty underwear last year, right?) Lastly, Trenton was a very proud Batman . .finally getting to show off his muscles .. . .fake as they may be. 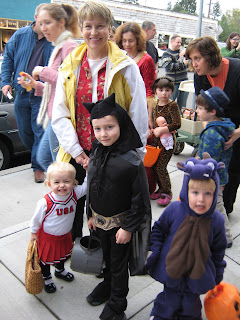 Put that baby back in your tummy

Dallas continues to amuse me daily. While nursing Lexi a couple of days ago we had the following conversation:

Dallas pointing to the bassinet next to my bed, "Dis Lexi's bed?"

Dallas- Why Lexi sweep (translation- sleep) in your woom?

Me-Where else could she sleep?

Dallas -Her can sweep in Brooklyn's woom.

Me- Well, baby likes to eat a lot during the night so I keep her close to me.

Dallas- Where our next baby gonna sweep?

Me-You think we should have another baby?

Me- I think we'll have to get a new house. You sure you want another baby?

Dallas- Yes, I wanna boy one dis time cause I don't want fwee girls. The new baby can sweep in my woom (standing in only his underwear and pointing to his nipples) cause my miwk come out of dees things.

Dallas-So put dat baby back in your tummy.

Dallas- Put dat baby away. Put it back in your tummy. I wanna boy one.

So, if by some miracle we decide to have another child someday and it happens to be a boy (since I would be required to put the girl back in my tummy) I am off the hook for round the clock feeding since Dallas will have the nursing covered.
Posted by daveandbri at 10:08 AM 9 comments:

Brooklyn has figured out how to cheese it big time! Here is my new favorite picture of her. 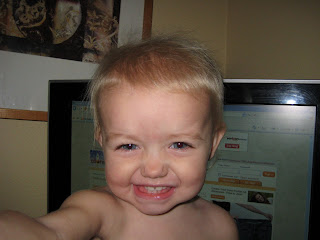 And the cake mix photos mentioned in a previous post. 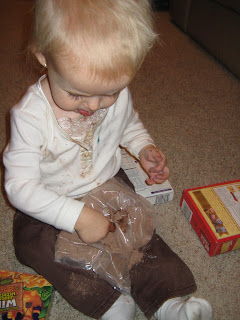 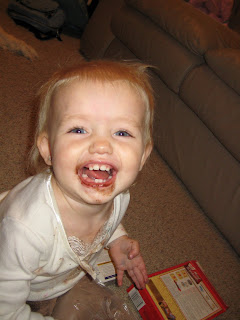 Anyone want to bring me dinner?

So, after an entire week of fabulous meals being brought in by great friends, it was finally my turn to cook again on Halloween. Since the holiday is always filled with way too much junk food, I decided to make my version of Shepherd's Pie where I am able to sneak lots of food processed veggies in without my kids throwing fits and refusing to eat it. Well, it went kind of like this: 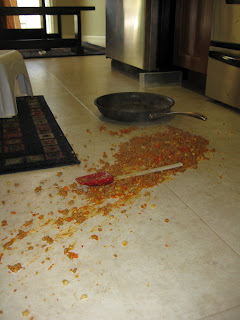 (Look close and you'll see it's still steaming)
So I am not really asking for more meals, but found it funny enough to share. Sadly, I followed the 10 second rule (although it took me longer than 10 minutes to clean up all the splatter) and scooped the main pile of this up into the casserole dish, topped it with mashed potatoes and cheese and baked it anyway. Surprize Dave! Desperate times call for desperate measures.
Posted by daveandbri at 3:34 PM 3 comments:

So, we bought the boys season tickets to the family movie matinee program where they feature a different kids' movie each week and parents get to go along for free. We've been to 2 out of the 4 shown so far. Dave took the kids to Wall-E a couple of weeks ago and yesterday it was my turn and I took them to see Space Chimps. Cute movie. About 3/4 of the way through the movie, Dallas gets all panicky and starts crying. I turn to look at him by my side and find that he has shoved a red hot up his nose. I tell him to blow it out, which he tries... only in vain. I tell Trenton to stay put and quickly escort Dallas out of the theater. Out in the lobby he is freaking out, but I finally manage to milk the red hot out of his nostril and clean up the "Red Hot" snot now running out of his nose. Upon returning to our seats I got to be entertained for the remainder of the movie, not by the Space Chimps, but my OWN chimp enjoying the tasty discovery of CINNAMON FLAVORED BOOGERS.
Posted by daveandbri at 1:59 PM 1 comment: