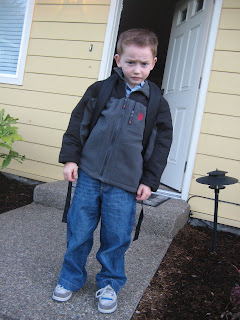 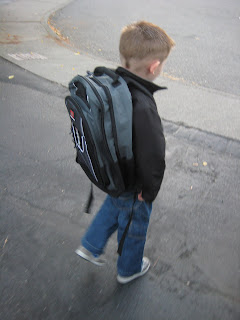 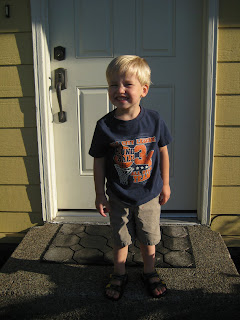 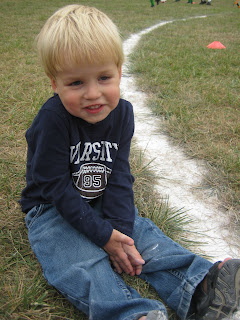 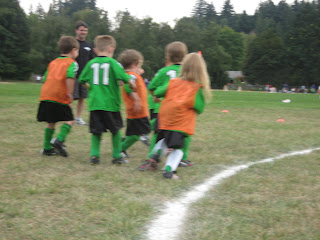 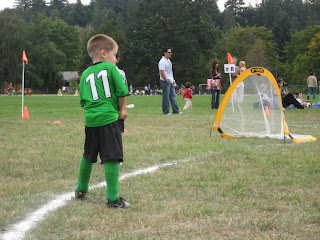 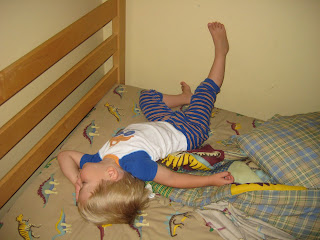 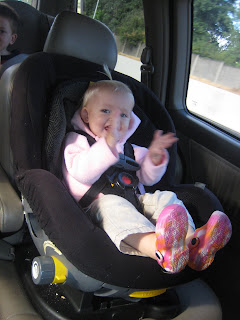 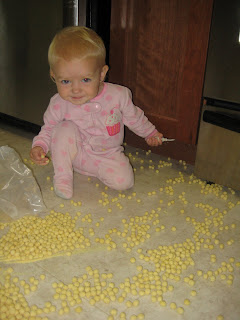 More summer fun! Brooklyn loves to "dance", clap and occasionally "sing" when there is music playing. She also loves to dump out boxes of cereal. Dallas sleeps in any position except with his head on his pillow lying the right way in his bed. Usually it's sideways with his feet up on the all or dangling over the side of the bed. In case anyone is wondering, no he is definitely not a fun kid to sleep with!
Posted by daveandbri at 10:30 AM 1 comment: 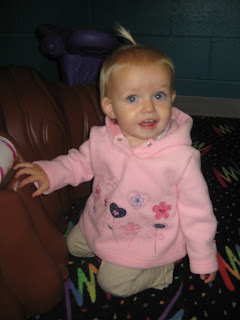 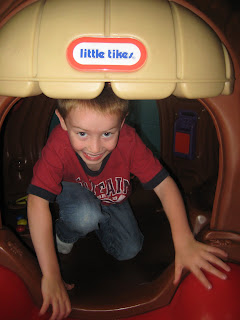 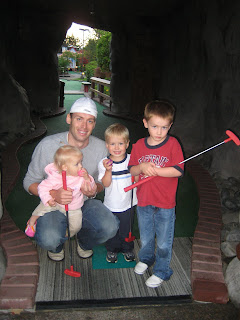 A summer outing where we actually took pictures. The family enjoyed a huge indoor playground, video games where they picked out really cheap toys with the few tickets they won and the kids played (including daddy) miniature golf.
Posted by daveandbri at 10:25 AM 1 comment:

Last week started out a bit rough around our house. After visits from the in-laws, Dave's brother Mike and my sister Margaret during the previous week and through the weekend, all the company returned home Sunday evening and we were ready to get back to normal life. Instead, Monday morning we woke up early to send Trenton off to school, followed by the awakening of Dallas and later Brooklyn. Brooklyn and Dallas are the kind of kids that like to eat the moment they get out of bed so I set Brooklyn up in her high chair with her usual food, only to have her barely touch it. I got her out of her high chair and she was unusually fussy. Although figthing a cold and still working on bringing in some new teeth, she was totally unconsolable so I decided it was time to try some tylenol. Well, it wasn't in the cabinet or on the counter and the last time I remembered seeing it was the day before when she was walking around shaking it like a rattle while all of our company was in town. Eventually, I went to her crib and found the bottle of tylenol burried under her comforter, lid off and completely empty. I instanty called Dave into her room and showed him my discovery. We were both unsure of when it had ended up her crib or when and if she had eaten it. Dave got on the phone with poison control, and we jumped through the ingredients of the drug, how much was possibly consumed, etc. They quickly determined that she needed to be brought to the ER immediately as this could potentially be a lethal dose for her little body. We threw on clothes and headed out the door. After grilling Dallas, we were confident that he hadn't eaten it and knew that Trenton was also not the culprit . .which left Brookly in her crib eating a bottle of children's tylenol. I was fine until we got to the hospital, checked her in and then I sat down and just started crying-unable to bear the thought of losing our precious baby girl. Untreated and taken at toxic levels, her liver would pretty much shut down and she wouldn't be around by the end of the week. I was very scared and anxious for them to draw her blood and tell us what her levels and liver function were showing. Well, the ER is always slow and several hours later they came back with her lab results which showed a significant amount of tylenol in her blood and slightly eleveated liver enzyme levels. Okay, so she was okay, right? Given the unknown time of ingestion (go responsible mom and dad) they wanted to proceed with the antidote treatment . .always playing it safe rather than sorry. So, eventually we were transferred down to the pediatric ward of the hospital and she was stared on her 1st of 3 doses of the medication that would be distributed through her IV for the next 21 hours. I felt awful and yet so grateful that she was going to be okay. She has a severe dislike for the doctor in general, and normally starts screaming the second she sees the scale at her well child visits . I'm sure this experience is really going to help. My mom came out to take care of the boys so Dave and I could switch off staying at the hospital and I could get to work that evening and the following morning. It was a long night at the hospital, Brooklyn trying so hard to sleep in her metal crib/cage and being woken up every few hours for her vitals (It reminded me what a joke it is trying to sleep in the hospital and I've decided for once I think I'll just come home as soon as they'll discharge me after delivering this next baby). She pretty much screamed every time they tried to check her and as a result her blood pressure was always high . .so I get to go back to the pediatrician in a few weeks to try and get a normal reading. . .(Good luck with that . . .didn't we already determine she hates doctors!) Anyway, what I've learned from this awful experience is that childproof containers aren't childproof . .not even for a one year old and medication shouldn't double as a rattle . .most of you have probably already made this brialliant discovery, but just in case learn from our mistake and save yourself the scare. Also, I realize how precious these little ones are and that nothing is more important than they are. It was a neat experience to spend so much time with Brooklyn . .one one one . .and comfort her when she would get worked up. She is a sweet girl, totally fine and back to being happynow. How blessed and fortunate we feel. Thanks to all of you who knew about this when it was going on for your phone calls, support and encouragement that I'm not the worst mother ever . .I was having my doubts, but am doing better now. 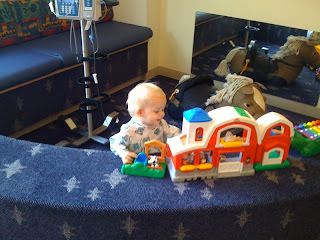 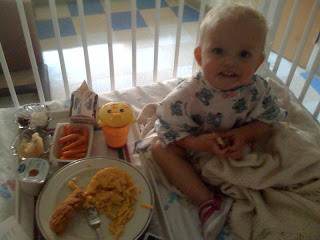 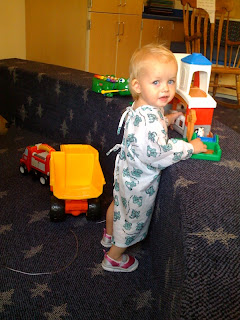 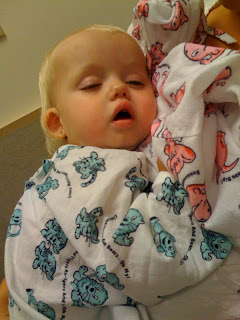 This Saturday we decided to take advantage of a day free from required things to do and make a semi-spur of the moment trip out to Silver Falls. We had heard that it was a beautiful area and had added it to our list of "things to do before leaving Oregon". Basically it is a state park that, within about a 5 mile loop, you can see 10 waterfalls (more like 6 during the non rainy season, a few of them were more like trickles that fell really far.) The kids handled walking up and down amazingly well and definately logged more miles than probably all previous hikes combined. There were a few times that we (mostly almost 8 months pregnant Bri) were literally applauded as we climbed switchbacks with children in tote. Of course no trip would be complete without the surprises of Dallas peeing in open public, using a rock to "color" on the minivans paint job, and Brooklyn falling out of the stroller 6 inches from about a 30' drop off. Just living the dream. 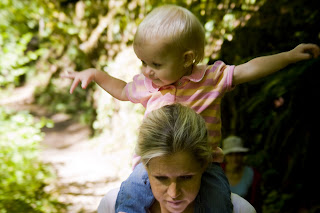 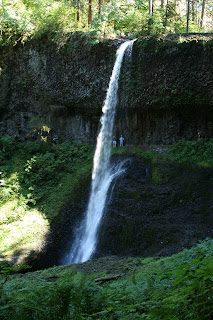 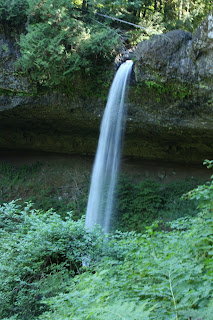 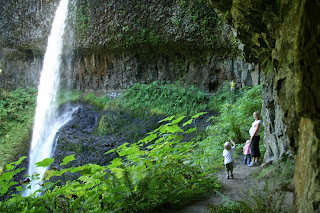 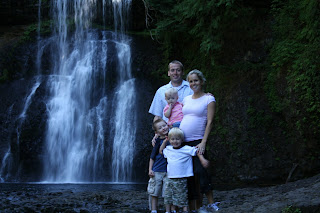 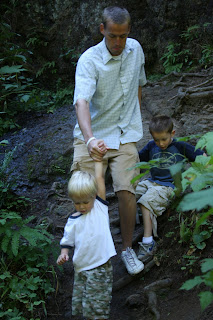 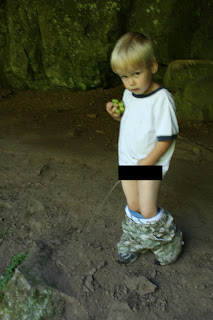 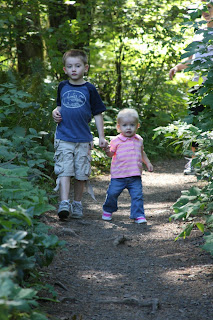 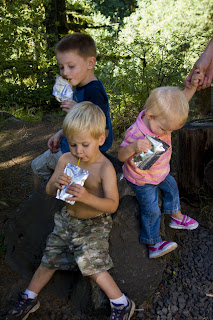