So we've learned that it's a lot less trouble using graham crackers than actually baking gingerbread since it's going to be quickly devoured anyway by the children.  This year we decided to let each of the children make their own.  When we piled them all in the microwave to keep them out of child's reach we thought it kinda looked like a village, thus a new tradition was born.  Here is the first annual Butlerville Christmas village (soon to be destroyed by Dallaszilla). 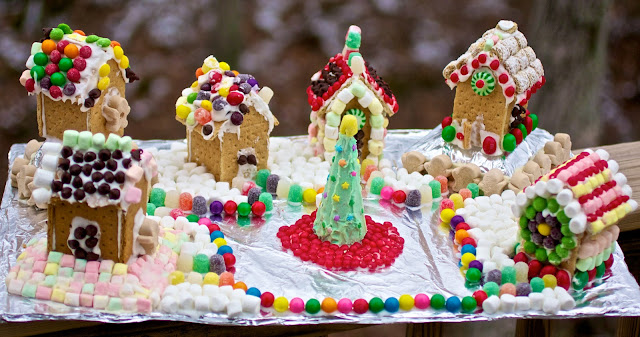 Some things get sweeter with time . . .our anniversary isn't one of them

Our celebration of 8 years together a few weeks ago went something like this:
We don't set an alarm because Trenton always wakes up before he is supposed to and wakes the rest of us up (he's been doing this since birth) in time for the boys to get ready and off to school.  Well, out of the blue, he didn't wake up on our anniversary until 7:15 (the bus comes at 7:10).  It was a rushed morning to get them out the door and have Dave drop them off on time at school  on his way out.  So, no goodbye hug or kiss or salutation that I can recall for our "special" morning. . .although Dave did kiss me on the forehead at midnight to wish me a happy anniversary in my sleep).  I sent him a text about an hour later when I realized I hadn't said anything that morning.
My parents were also in town for the last day of their visit and scheduled to fly out that afternoon.  I had it planned out perfectly to be in the car ready to go when the boys got home at 2:50 so that I could drop them off at the airport and make it back home in time to meet Brooklyn's bus.   At 2:35 I get a call that I don't answer cause I didn't recognize the number only to retrieve the message a minute later and learn "there has been an incident with Dallas on the bus, that he cut his head and is bleeding pretty badly and will need to be picked up back at the school.  I quickly return the call and they tell me while standing on the seat trying to open a window he fell and cut the back of his head on the window latch.  I ask if they think he'll need stitches and while initially unsure because they couldn't really see the wound, they shortly came back with, "yes, we think he will".  I ask them where his brother, Trenton, is and they inform me that he is still on the bus.  (So somehow I am supposed to come to the school and get Dallas but not be here to meet Trenton when the bus gets here in 10 minutes.)  I explain the dilemma but tell them I will check with my neighbor and be there as soon as possible.
My window to get my parents to the airport is quickly disappearing.  I leave to go and get Dallas only to turn around and go back for my phone that I left behind, but that detour allowed me to spot Trenton's bus in the neighborhood and flag it down to get Trenton.  All the while, I get a hold of Dave and ask him if he can help me .  , ,"well, where is he cut because if it's in his hair I won't really be able to help," he tells me.  I clarify that I don't want him to do the stitches, but can he help me either with my parents ride or a trip to the ER?  He gets his patients transferred and meets me at the hospital where I drop Dallas off on my way to the airport.
My neighbor gets Brooklyn for me, although I miraculously make it back just behind her bus.
Dave spends the rest of the afternoon at the hospital where Dallas receives 4 staples in his head but makes it home in time for his indoor soccer game that night . .where his head injury helped him secure a hat trick.  Unfortunately Lexi having sympathy pains for her brother (combined with a sippy cup of chocolate milk followed by a juice box from me) decided to hurl in my lap at the soccer game.  So I'm covered in vomit and so is the turf where I was sitting.  The staff graciously offers Lexi a leftover flag football shirt from the previous season to change into and they offer me one as well . . .but seeing as how all the puke was on my pants, I was unsure (even in Kentucky) how socially acceptable it would be for me to walk around in nothing but a t-shirt and was forced to decline.  Dave insisted that I at least wipe the chunks of vomit off of myself and then I sat there for the rest of the game in all my glory.  Dave drove home with his head out the window and well that's how we celebrate marriage in our house. 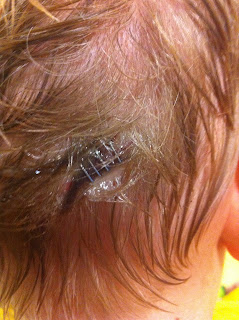 **Lest you should feel bad for us, which I 'm sure no one does, we did have a wonderful date a few days earlier. . .thanks to my parents for staying home with the kids while they were visiting.  Dave planned a surprise pottery class for us to take together  .. big surprise for me as he and I both know that I don't have a creative bone in my body.  However, we had a lot of fun and well as far as the pottery goes, I haven't seen the final pieces yet, but the process was more fun than I thought it would be.**
Posted by daveandbri at 7:03 PM 6 comments:

Lexi Discovers She Can Move Her Eyebrows